[simulpublished across all my blogs] 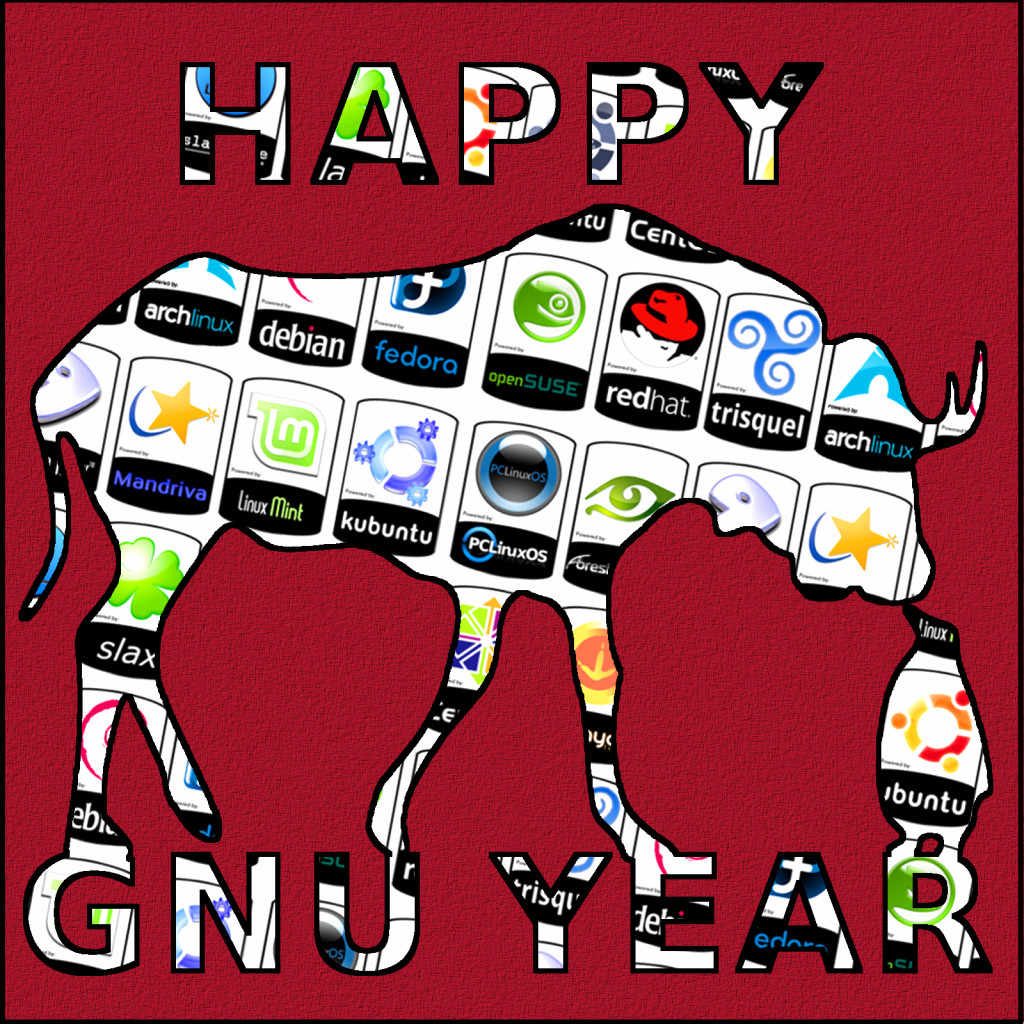 This virtual card is the best gift I can give my readers and online friends this holiday season. Not just because its the best and most awesome Happy GNU Year card you’re likely to find online, but because I created it entirely using free culture and free software.

The Free Software Foundation‘s GNU operating system led to the adoption of the gnu as its symbol. Free software is incredibly important for a host of reasons, and yet I very much suspect it wouldn’t exist at all any more but for the efforts of Richard Stallman and the FSF. I highly recommend that you use free software as much as possible, not just because it’s usually free of charge (gratis) but far more importantly, because it respects our personal freedom (libre).

The penguin “Tux” is the mascot of the Linux kernel, is the heart of the free and open source software operating systems we use today. (MacOS and Windows are the non-free software used in personal computing devices (computers, cell phones, tablets, PVRs &tc.)

If you click on the card, you’ll find a higher definition version suitable for printing. And you are allowed to print it, because this card carries a free culture license, specifically a Creative Commons Attribution-ShareAlike 3.0 Unported (CC BY-SA 3.0) License This license gives you the freedom to use this creative work in any way you like, even commercially, with only 2 restrictions.

Attribution is simply giving credit where credit is due. I try to provide attribution for everything I use, even work in the public domain. The “share-alike” part of the license exists to prevent creative works from being removed from free culture and locked behind copyright.

Below you can see the steps that led to this card. Click on any of the images below for a larger/printable version. 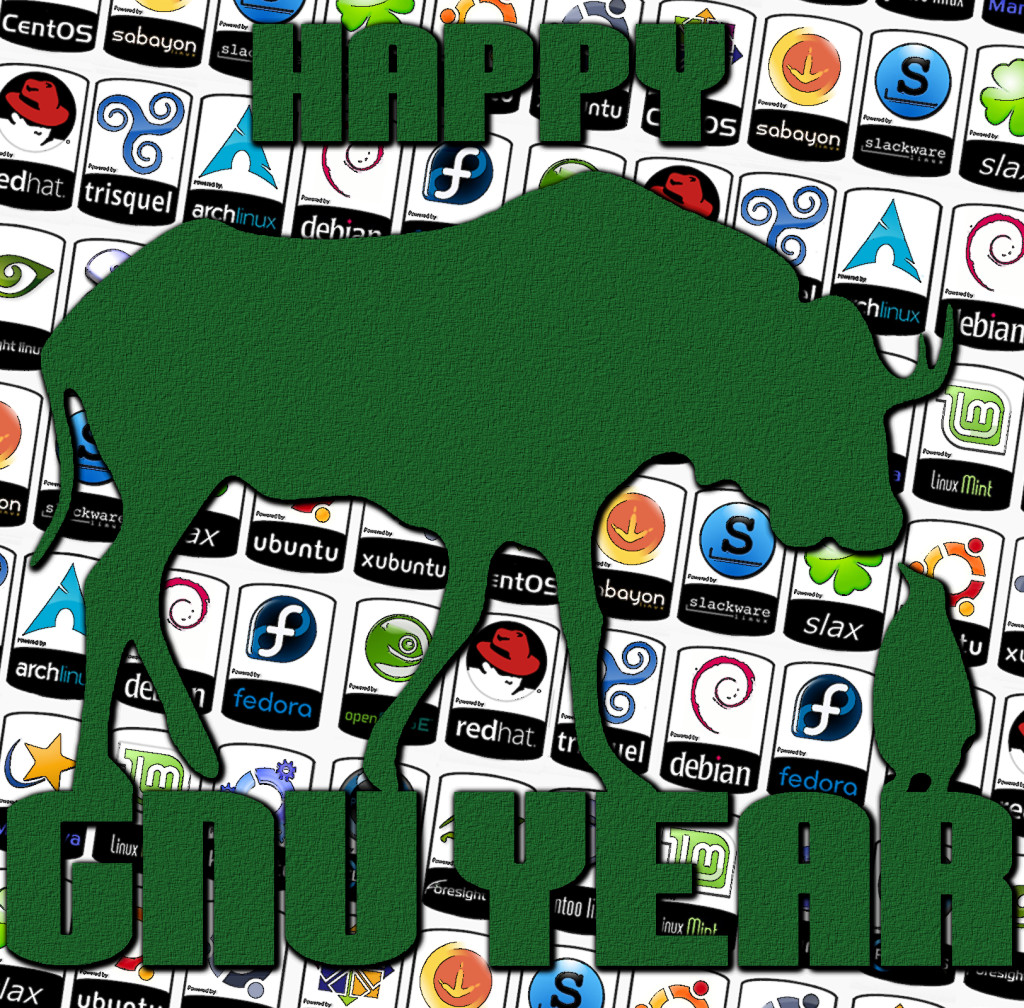 The green one is my first try, which I like a lot. It could make a good poster, but it’s too difficult to see and read in small formats because it’s too cluttered. 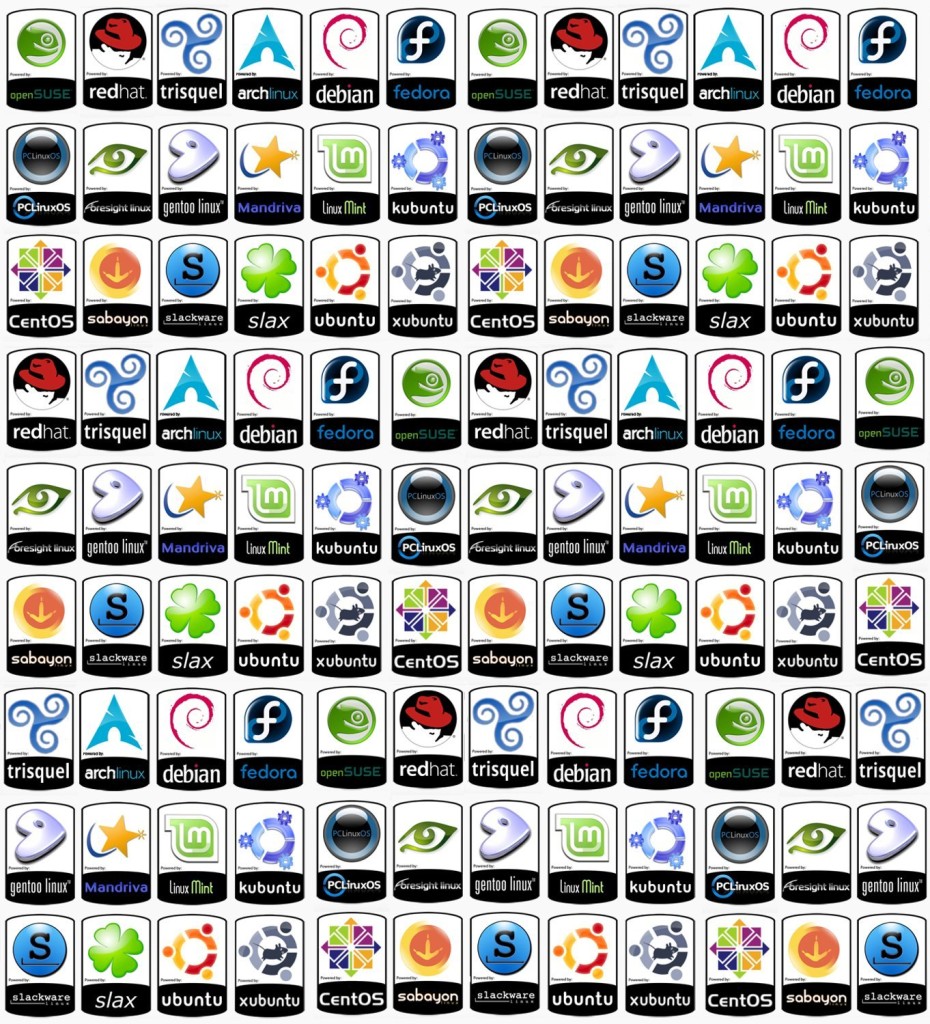 Next is the “wallpaper” background I devised. I modified the Powered by GNU-Linux sticker set originally created by deviantdark and published on deviantArt under a Creative Commons Attribution-ShareAlike 3.0 Unported (CC BY-SA 3.0) License. There are many free software operating systems not included, so I added Trisquel and centOS when I made up the wallpaper background. You can download the printable sticker sets from the deviantART Powered by GNU-Linux page and make your own sticker for your computer. 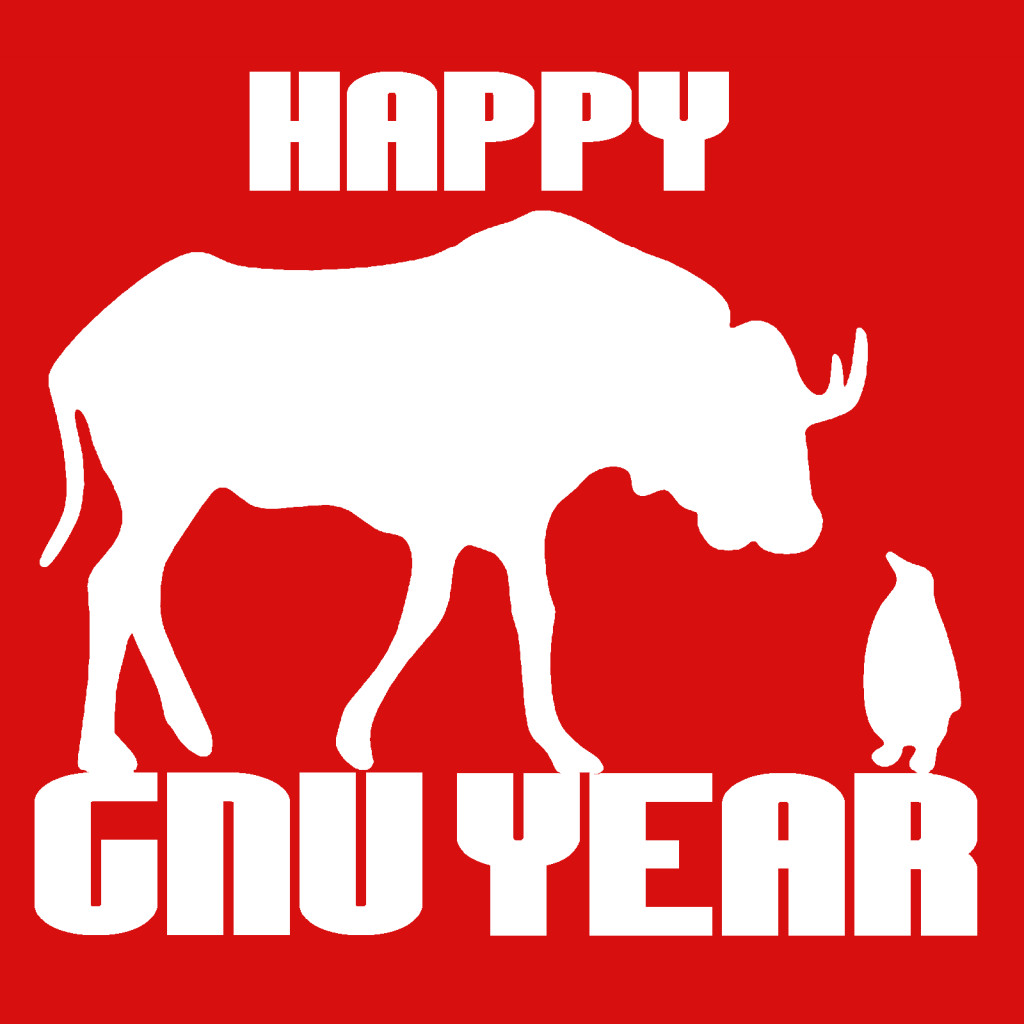 The last red and white image is the first draft of the red card. I loved the simplicity of Rasmus Olsen‘s gnu meets penguin titled GNU/Linux licensed Attribution-ShareAlike 3.0 Unported (CC BY-SA 3.0) that I found on Flickr. I altered the image by bringing the penguin close enough to touch noses with the gnu, and stood them both on the lettering. In the final version, I changed the lettering because it was hard to read when the wallpaper was added.

CORRECTION: Rui Damas is the originator of the GNU/Linux artwork I reused, and it was actually released under the GNU Public License. I’m not entirely sure what that does to my licensed usage. [Thanks to Mike Linksvayer for pointing that out!]

It’s no harder to learn to use free software than it is to learn to use a windows computer or a Mac. Many Apple and Windows users are already using free software with Firefox or OpenOffice (I prefer LibreOffice). The coolest and best ebook conversion software is called Calibre (it comes with a good e-reader so you can read eBooks on your computer). And of course my favorite blogging software, WordPress is free software. Wikipedia runs on free wiki software (which is why there are wikis popping up all over) and if you’re into video production, you could so worse than the amazing Blender 3D animation software or Kdenlive for video editing. You can use social networking with GNUsocial and Friendica. If you do switch to free software, the biggest difference you’ll notice is that you don’t have to pay for things again and again and again. Other advantages include better security and a much lower incidence of spyware and other malware.

It was difficult for me to unlearn Photoshop so I can learn to use GIMP, but I keep trying. I still look for a lot of the features where they would be in photoshop, but its getting easier. I have yet to find anything Photoshop can do that can’t be done in GIMP; the challenge is finding out how to do it. That’s why I’m so pleased I made this card entirely with GNU Image Manipulation Program (GIMP) on my computer, which is currently runs on Linux Mint in a MATE desktop environment that has the Ubuntu Studio plug-in.

As the copyright maximalists successfully lobby to lock up more and more of our culture for longer and longer terms, the importance of free culture has become more apparent. Sites like the Flickr photosharing site and deviantArt make it easy for users to give their work Creative Commons licenses, so they are often the easiest places to find images licensed to share.

All versions of my GNU year card are licensed Creative Commons Attribution-ShareAlike 3.0 Unported (CC BY-SA 3.0) License. If you’re interested in finding out what free culture is out there, I’ve been growing a list of Free Culture resources. And if you have some spare cash left over from last year, please consider making a donation to the two non-profit organizations that have been instrumental in ensuring the continued existence of free software and free culture:

And have a Happy GNU Year!